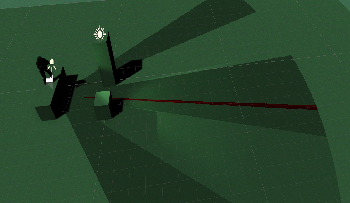 The environment art is starting to come in and is looking great! We won’t be showing any of it off just yet, but we’re very excited with how things are shaping up. The big concern with the art was that our existing systems wouldn’t work properly with it (mainly due to more complex collisions). We’re happy to report that everything basically works as we originally designed and, with a little refinement to the art, we should be in a really polished state pretty quickly.

With this new art, we started really testing out our camera. We had already implemented a system to turn walls transparent that come between the camera and the player (similar to something you would see in Diablo 3)

and this system held up great with the new art. It just needed a few tweaks to make the walls a little more transparent and to make them go transparent sooner. We also implemented the ability to specify walls as either interior or exterior. The difference being that interior walls become transparent (and the camera can pass through them), while exterior walls will collide with the camera and cause it to adjust to a new position that keeps the player in view without going outside of the play space.

We are trying out the ability for our dogs to “smell” the player.  It’s in a pretty rough state visually, but the concept is that the dogs will have an increasing smelling radius that can detect the player unless they are hiding in something that masks their scent.

It is working well in our test room, so now to throw it into some real game situations and see if it holds up.

In last month’s progress report, we posted a video that showed off how we improved the visual representation of our vision cones and also discussed it’s drawbacks. This milestone, we implemented the ability for the code to distinguish between no cover, half cover and full cover. The current materials we are using make it a little difficult to see the differences, but essentially there are the following situations:

We are really happy that we were able to get that tech cleared up. Now it’s just a matter of having an artist figure out some materials that work well together to make it more readable for the player. However, we probably won’t make any progress on those materials until more levels have final art in them.